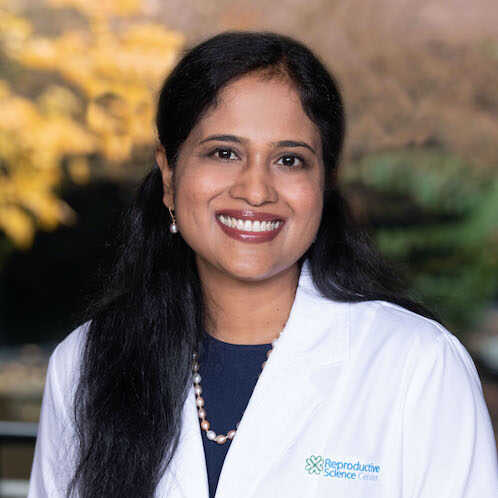 Dr. Ramya Sethuram received her medical degree from the Tamil Nadu Dr. M.G.R. medical university in India, where she graduated top of her class with gold medals in pediatrics and obstetrics and gynecology (OB/GYN). She traveled to the United Kingdom to receive her residency training in OB/GYN to be followed by a fellowship in gynecological oncology at the highly regarded University Hospitals Birmingham. Dr. Sethuram has extensive surgical experience in performing complex pelvic surgeries and is trained in robotic and laparoscopic assisted surgeries for fibroids and endometriosis.

She met her husband, who is from California, and decided to move to the United States to raise her family, embarking on further specialized training in the field of OB/GYN. As part of her journey, she completed her OB/GYN residency at Drexel University in Philadelphia followed by fellowship training in reproductive endocrinology and infertility (REI) at the Wayne State University/Detroit Medical Center. Dr. Sethuram was nationally recognized for her contributions to research in the fields of OB/GYN and REI and has earned many awards through her career, including the American Society for Reproductive Medicine (ASRM) in-training award for her research during fellowship and the Denis Hopkins award by the Journal of Obstetrics and Gynecology for the best publication by a young author.

She has published many research publications in journals including Fertility and Sterility, Reproductive Sciences and F&S Reports. She has presented abstracts and presentations in national and international societies. She is a member of the Royal College of Obstetricians and Gynecologists, American College of Obstetrics & Gynecology and tASRM. She is a board certified OB/GYN both in the U.K. and in the U.S.

She is passionate about her special interests which include implantation failure, fertility preservation, recurrent pregnancy loss and egg freezing. Dr. Sethuram believes that the future of medicine lies in keeping up with new innovations and in educating and partnering with patients to achieve the best results for each person. She believes in being a good listener and strives to make a personal connection with each patient and in practicing personalized medicine. She understands the complex responsibilities of being a reproductive endocrinologist and infertility specialist in helping people through stressful and anxious times and is thankful for her role to help build families.

Dr. Sethuram was raised in India and considers herself a global citizen, having also lived in Europe and North America. She moved to the U.S. over nine years ago and she loves living in the Bay Area. In her free time, she loves biking or hiking with her husband and two kids or exploring the national parks across America. She is an avid baker and has participated in amateur baking competitions. She attended the London School of Journalism and was a freelance writer for dailies including The Guardian in the U.K. Dr. Sethuram is fluent in English, Tamil, Kannada and Hindi.

I believe that we achieve the best possible results by listening to our patients.
Unlike many other medical problems, I understand that the fertility journey can impact people’s everyday lives and the choices that they make. So, as a doctor, I strive to use my wide experience of working across different cultures in understanding my patients culturally and socially and in bringing a personalized perspective to their care.
Dr. Sethuram

An introduction to Dr. Ramya Sethuram