Does Older Age Affect Male Fertility and the Health of Men’s Children? 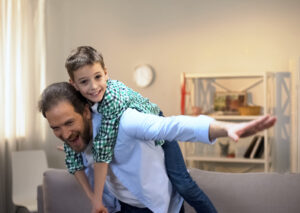 We focus a lot on female age and fertility.

But there are also known effects of male age on fertility and the health of their children.

Sperm count is often not affected by male age. But there are effects of older age on semen volume, sperm motility, and sperm DNA fragmentation. These parameters can affect the chance for pregnancy as well as the health of the pregnancy.

Increasing female age significantly affects the percentage of embryos that are chromosomally abnormal with in vitro fertilization (IVF). Some studies have also suggested that embryos from older men have a higher percentage of genetic abnormalities. But a recent large study of almost 7,000 embryos tested genetically found no association between older paternal age and overall rate of embryo chromosome abnormalities.

There does appear to be a slight increased risk of Down syndrome, or trisomy 21, with older paternal age. However, this is much less significant than the risk with older maternal age.

There also seems to be an increased rate of miscarriage in pregnancies fathered by older men, even when adjusted for maternal age.

Pregnancies from older paternal age have an increased risk for very premature birth.

There is now evidence that advanced paternal age significantly affects the risk of having a child with autism spectrum disorder, ADHD and the other psychiatric disorders.

There is also a slight increased risk for other congenital abnormalities including cleft palette, neural tube defects, and congenital heart defects with advancing paternal age.

Some possible reasons for these increased risks in older men include long term accumulation of environmental risks that could affect DNA fragmentation in sperm, as well as an increased frequency of genetic mutations that can arise with older sperm.

Some of these effects on sperm could possibly be decreased by reducing oxidative stress through eating a balanced, healthful diet rich in fruits and vegetables, limiting intake of processed foods, particularly those high in sugars and fats, exercising regularly, and stopping cigarette smoking. Taking an antioxidant vitamin may also be helpful.

Do you need to see a fertility specialist?

The man is as likely as the female to be the source of infertility in a couple. If you’re concerned that age or any condition may be affecting your fertility, it’s time to see a fertility specialist.

The effect of older male age on fertility and pregnancy health is likely significantly less than the effect of advanced maternal age. But men looking to become parents should consider some effects of advanced paternal age as well.