Is AMH the New FSH? 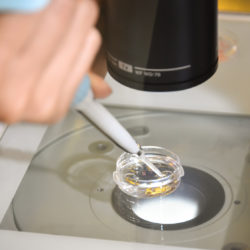 So, the AMH is a useful measurement to assess how many eggs are in the ovaries. The AMH level starts to rise in early childhood, peaks in a woman’s twenties and then gradually decreases until menopause when there are very few remaining eggs in the ovary.

AMH is produced by the granulosa cells in the pre-antral follicle. It functions to inhibit excessive follicle recruitment for ovulation. AMH modulates the FSH’s stimulating effect for each ovulation cycle so that only one egg is ovulated each month. In a sense, it is nature’s safety measure against multiple pregnancy.

The way the AMH level is used in fertility assessment is to gauge the number of pre-antral follicles remaining in the ovary. If the AMH is low, then the overall reserve of eggs remaining in the ovary is low. This information is used along with other markers of ovarian reserve: FSH level, the antral count, and the woman’s age. If the AMH level is very low, then this indicates that even with high doses of fertility medications there won’t be but a few egg follicles there.

It can also be used to gauge a woman’s biological time line. If the AMH is somewhat low, perhaps it is time to be more aggressive with treatments before the number of eggs becomes very low.

If the AMH is high, then the number of eggs is also high. This is reassuring information with respect to a timeline of building a family, but it is also useful information for the physician. A high AMH also means a higher risk of over-responding to fertility medications. Knowing this in advance, the physician can choose a medication dose and protocol to keep the risk of ovarian hyperstimulation low, making fertility treatment safer.

So far, however, AMH has yet to replace FSH as a fertility test. The way I like to look at it is that the FSH is a hormone level that is constantly changing, responding each day to the cycle needs. The FSH is telling us how well the ovary is functioning, because FSH levels are high if ovarian production of estrogen is low (and this goes along with low egg number) and FSH levels are low when ovarian function is good. AMH is fairly static, it is not looking at function so much as quantity.

Using AMH along with the FSH, estradiol, antral count and woman’s age are all independent factors that together give an overall picture of a woman’s reproductive potential. The more information we have, the better decisions we can make for our patients, and patients can make for themselves.