The Low Down on Intracytoplasmic Sperm Injection, Also Known as ICSI

A form of artificial insemination, ICSI used with IVF requires a risk-benefit calculation for different causes of infertility 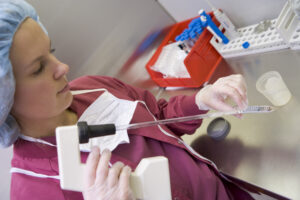 For as long as there have been men there has been male factor infertility (Adam needed a female partner in Eve!) But it was not until 1992 when ICSI came onto the scene that real help for severe male factor was found. ICSI stands for intracytoplasmic sperm injection and was originally used in IVF (in vitro fertilization) to improve success rates when sperm count, shape, or motility was abnormally low. The procedure involves injecting a single sperm into the cytoplasm of a female egg, which is where fertilization occurs.

This has helped many men who otherwise would have had to use donor sperm in order to have children. It actually was so successful in fertilizing eggs that, of course, IVF doctors began to wonder if it could improve success rates for people who had other causes of infertility.

And so, ICSI began to be used in couples with unexplained failed fertilization, then unexplained long-standing infertility, women with “older” eggs, or fewer eggs, and more recently in couples desiring PGT (preimplantation genetic testing). As it is with several things in the field of infertility, success rates began to drive the usage, rather than carefully designed clinical studies.

However, there are some studies that can be used to practice evidence-based medicine and help patients decide if they want to make ICSI a part of their treatment plan.

The overriding fear most patients face when making this decision to use ICSI with IVF is the fear of failed fertilization – meaning none of the eggs are fertilized with sperm. This is most often discovered 24 hours after the egg retrieval when the embryologist opens the incubator and puts your petri dish under the microscope to check to see if there was cell division and the production of the second polar body and two pronuclei in each embryo. If there is failed fertilization, it is then too late to choose to do ICSI, as “rescue ICSI” (injecting sperm into an egg after this point) has very low success rates.

But this fear always needs to be balanced by the desire for the best success, and that includes the highest pregnancy rate as well as the healthiest babies. So there is a risk-benefit calculation that needs to be done.

The following scenarios can help patients make the decision on whether to do ICSI or not. But ultimately, patients and their doctor will need to work together to decide which risks a patient is willing to accept.

At Reproductive Science Center we do not charge extra for ICSI.

RSC has a fertilization rate of 75%-80% per mature egg. There is good data to show that the risk of failed fertilization or extremely low fertilization is significantly higher in this population and therefore will increase the success rate of IVF.

There are some studies that show an increased incidence of birth defects, including severe male factor infertility in male offspring when ICSI is used for this indication. This increase is small, but likely real, due to genetic issues causing male factor infertility that can be passed on through the sperm. For many couples, the small increase in risks for the baby are outweighed by at least being able to have a genetic child.

ICSI for prior failed fertilization

There is good data to show that ICSI will help this population of patients. There are some patients who will still have very low or no fertilization with ICSI. This includes, for example, those with globozoospermia, which is an abnormality of sperm shape and content. But for many with failed fertilization, they will have a greater chance of getting to embryo transfer if ICSI is performed.

ICSI for diminished ovarian failure, older eggs or fewer eggs than is typical

While it is tempting to think that older eggs have harder shells (zona pellucida), there is not good evidence that this is the case. However, since fewer eggs of poorer quality may be less capable of making an embryo, it is reasonable to consider ICSI so that a patient may still have a chance at getting to embryo transfer and a healthy baby.

In good studies, the success rate is not higher if ICSI is done in this patient population. This risk-benefit scenario requires thorough doctor-patient discussion.

There is no data to support the routine use of ICSI for this diagnosis. While it may lower the chance of failed fertilization and increase fertilization rates, there are several studies that suggest a slightly higher success rate for the conventional insemination group compared with the ICSI group. In order to prevent one case of failed fertilization, 33 cases of ICSI must be done when it is not necessary.

Related Reading: How to Conceive After a Diagnosis of Unexplained Infertility

Use with preimplantation genetic testing (PGT)

This may be the most controversial of the scenarios mentioned here. Originally, ICSI was necessary to obtain a secure diagnosis of the proper chromosome count for an embryo. The older ways of testing the embryo, including FISH (fluorescence in situ hybridization) and even PCR (polymerase chain reaction) techniques, made the chance of contamination from the unsuccessful sperm worth any risk ICSI might have, since a clean chromosome report was paramount. However new technology, like next generation sequencing, makes “contamination confusion” less likely.

ICSI cost (free at RSC) is not a factor

At Reproductive Science Center we do not charge extra for ICSI. Therefore, the decision is only one of deciding if the increased fertilization rate, the reduction in failed fertilization, and the optimization of PGT is worth the potential lower pregnancy rates or increased possibility of having a baby with structural or developmental issues.

Since there is a lack of evidence to show that ICSI done in patients with a normal sperm count can cause an increase in birth defects, we at RSC will recommend ICSI for long-standing male factor infertility with failed intrauterine insemination (IUI) cycles, for PGT cases, and for patients who have fewer eggs and the inability to try IVF again in the future if complete fertilization failure occurred.

Related Reading: See how the magic happens with a tour of our IVF lab