By Reproductive Science Center on December 29, 2014

The luteinizing hormone (LH) gets made in the part of the brain (the pituitary gland) that is responsible for regulating complex processes. However, the organs that LH helps regulate are actually in the reproductive system. For example, triggering the release of an egg from the ovary, a crucial reproductive process known as ovulation.

Measuring this and other hormones are key indicators of fertility. Understanding what LH is, when levels of the hormone rise, and the relationship between this rise and fertility is crucial for people trying to conceive.

What is the LH surge?

The process of ovulation is a complex symphony of events leading up to the actual release of the egg (oocyte) from the ovary. Before the egg is released, there is a 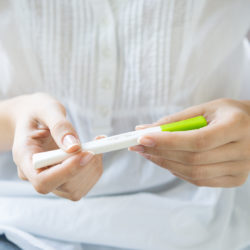 surge in the production of L from the pituitary gland. This release is known as the “LH surge.”

The LH surge is a signal from the brain to the ovary that an egg is mature. In response to the increasing levels of estrogen from the maturing follicle (egg cyst), the pituitary releases a burst of LH. When the follicle sees this increase of LH, it completes the maturation of the egg and allows for the release of the egg from the ovary (ovulation) into the Fallopian tube.

Typically, from the time of the onset of the LH surge in the blood to the release of the egg is 24 to 36 hours. The urinary detection of the LH surge may be seen 3-6 hours after the rise in blood LH levels.

When does the LH surge occur?

The LH surge may not be seen in every cycle. In women with very irregular or long cycles, LH surge testing is often not helpful. When the LH surge is not detected, it may indicate an underlying ovulation disorder. Check with your healthcare provider for the best days to test.

How do I test for the luteinizing levels?

There are a number of commercially available urine test kits and monitors for detecting the urinary LH surge. If you have not used LH test kits before, we recommend either Clear Blue Easy or First Response.

Testing is done each morning at home. When the LH surge occurs, a color change will be seen on the test strip or monitor. Many of the kits advise testing with the first morning urine sample. As the LH surge typically begins in the early morning hours, we advise our patients to test their second urine of the morning to reduce the chances of missing the LH surge.

For improved success in detecting the LH surge, test about the same time each day and reduce your liquid intake for 2-4 hours before testing (drinking large amount of liquids before testing can dilute the LH concentration in the urine and make detection of the LH surge difficult).

How can LH surge testing improve the chances for pregnancy?

Once the egg is released from the ovary, the egg is fertile for just 12-24 hours. Sperm can survive within the woman’s reproductive tract for up to 5 days. It is generally held that a woman’s most fertile time will be before or just after the actual event of egg release.

As the LH surge signals ovulation should occur within 24 to 36 hours, detecting the LH surge (color change) can help determine the most fertile time in a women’s menstrual cycle. This allows for improved timing of either intercourse or insemination for pregnancy.