“OK, so just tell me when I need to show up and where, and by the way, how many days of abstinence?” 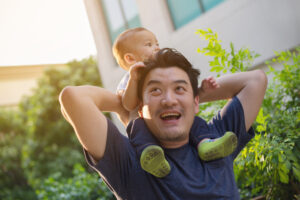 Sometimes it seems this is the only question I get from male partners of couples with infertility. But it really shouldn’t be, and I know it really isn’t, because after I answer this question there are several more questions to follow. It just takes cracking through the tough exterior to recognize that there are concerns and desires hidden underneath.

Despite the fact that the woman feels the clock is her only enemy, male infertility plays a relatively large role in getting patients to my office. And while it may not be the only reason, it could be a contributing part.

It turns out that of the 15% of couples that are unable to conceive in any year, male factor is the primary cause in approximately 20% of couples. It is a key contributing factor in another 30 to 40% of cases. This means that over half of all infertile couples have male infertility as part of a factor in their diagnosis.

Fertility test for men to identify problems “down there”

A careful history is taken by a doctor, and sometimes an exam (typically done by a urologist, not an OB/GYN), in order to determine if male factor infertility is present. There are a variety of things that can cause infertility in men. Many of these issues can be discovered and treated.

We need to know about childhood and developmental illnesses. Additionally, we need to know about medical problems such as diabetes, prior surgery and any medications that are taken. Sexually transmitted diseases or other problems “down there” are also important to share with a doctor.

In our fertility tests for men we also look for exposure to toxins and chemicals that can affect the sperm. This includes environmental exposures, chemical toxins, heat, and the most significant one of all, testosterone supplements.

After the exam, we will typically order a semen analysis. It’s relatively cheap, highly informative and noninvasive. But it sure can be awkward. Some clinics might ask you to “collect” your semen sample in a room with a bunch of people walking outside the door or in the men’s restroom.

We won’t do that to you here – we have a special hallway with rooms for collection. Rest assured you can ask for things that might make it better. This can include things like collecting at home, bringing your wife in, collecting at a time that’s better for you.

What are we looking for in a semen analysis?

In the semen analysis, we will look at the volume. Most of you are well aware of this volume aspect, but there is also the concentration of sperm, the percentage of moving sperm, and the shape of the sperm. Ultimately, we are able to calculate a total number of sperm per ejaculate.

The new World Health Organization standards put the lower limits of normal at 15 million sperm per milliliter and over 40% of them moving, with 32% moving forward. While this puts you in the range of normal, in clinical trials looking at actual success rates with artificial insemination, sperm concentration was most often over 48 million per milliliter with motility over 63%.

If there is less than 10 million sperm per milliliter, sexual dysfunction, or other signs and symptoms suggestive of a hormone problem, the doctor will order a basic blood test. This test will look at your hormone levels including follicle stimulating hormone (FSH), testosterone and prolactin. Luteinizing hormone (LH), TSH (thyroid), as well as estrogen evaluations can be ordered for a more thorough investigation.

Genetic abnormalities can also be tested for in men with severe abnormal sperm parameters. Testing for cystic fibrosis is key especially if there is the absence of a vas deference (detected by exam).

If a man’s sperm count is less than 5 million per milliliter, a chromosome test, a karyotype that checks the number and appearance of chromosomes in a cell nucleus, should be checked because approximately 5 to 15% of men will have an abnormality causing their low sperm count. This abnormality could be passed to offspring or result in an increased risk of miscarriage. There are even some genetic tests that can help us know if sperm can be found at surgery if there are no sperm in the ejaculate.

“Thankfully, male factor infertility can be cured the majority of times with our current technology.”
– Dr. Hinckley

Moving on to male infertility treatment

After this evaluation and work up, we are often able to determine the best treatment. It may be that we try to improve the sperm with diet, exercise, stopping harmful medicines or quitting testosterone supplements. Or we may recommend moving toward intrauterine inseminations (IUIs) where the sperm is boosted to increase the number of motile sperm at the time of ovulation. However, if this is not successful in three or four tries, we usually recommend in vitro fertilization (IVF).

There is a special case when the morphology (shape) is severely abnormal. Earlier studies showed that if the morphology was <4% in normal formation that IVF was the next best step. However newer studies (Kovac 2017) show that if the volume, concentration and motility are good with only the shape being highly abnormal, it’s reasonable to try several IUIs first before moving to IVF. If the IUIs are not successful, then IVF with ICSI (sperm injected into the egg) is the best treatment.

Healthy sperm gives her eggs the best chance for pregnancy

Thankfully, male factor infertility can be cured the majority of times with our current technology. We may not always be able to fix the underlying problem but we often have solutions.

However, the quality of the sperm can help in other ways too! If a woman’s eggs are less than ideal, then it is important that the sperm is as healthy as possible. Not every egg will be healthy. If the embryologists happen to put an unhealthy (but normal appearing) sperm with the only healthy egg, the sperm could cause that cycle to be unsuccessful.

Therefore, if a man does his part and optimizes every single sperm that he can, he can feel confident that he’s giving the eggs the very best chance to become a baby.