By Reproductive Science Center on February 3, 2016 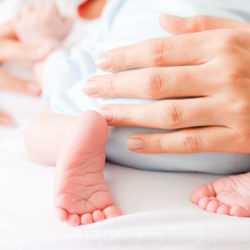 I have always dreamt of being a mother and started considering single motherhood after decades of unsuccessful relationships. I was afraid of doing it alone until age 35, when a serious relationship I thought was heading toward marriage ended. I decided to be brave and try parenting as a choice mom. I felt mature and stable enough to start the journey.

A knowledgeable and caring team

I tried IUI, but was diagnosed with ovarian reserve failure and would not be able to use my own eggs. I was devastated and didn’t know where to turn. Then I was referred to Dr. Weckstein and the RSC team.

They are the absolute best because they are a team. Everyone, from the receptionists to the nurses to the doctors, was so positive and welcoming. I was so accustomed to hearing negative things about how my body wasn’t doing what it needed to do, but at RSC I was always reassured that the doctors had a solution for any problem, and they did. The people of RSC were amazing, nurturing, and caring folks who honestly want to create families. They understood that families come in many forms, including same-sex and choice mom families like my own.

Just knowing that the RSC team was comprised of experts in their field relaxed me so much that I no longer was afraid or stressed during treatment. It was like a huge weight had been taken off of me. I really believed I would get pregnant and I actually did.

At RSC the patient is part of the team, and Dr. Weckstein kept me updated and gave me the final say on how to proceed every step of the way. That gave me a sense of control over my own body. Instead of feeling like everything was spinning out of control. RSC gave me that control back.

When I came to RSC I was afraid I might never be a mom. RSC did the impossible, they gave me two healthy twin boys via donor eggs and donor sperm on my first IVF cycle. RSC makes dreams a reality.

Choosing to be a single mom was the best decision I have ever made. I am a proud mother of twin boys and my only regret is that I didn’t start my family earlier. Motherhood at 40 is great because you have so much patience and wisdom but I could use the energy level of a younger woman!

I am truly happy and fulfilled. And I have a wonderful sense of security and pride knowing that I am raising my family on my own and do not need to worry about being dependent on anyone else for our survival and well being.

RSC is a place of hope where one enters as an individual and leaves as a family. I recommend RSC to my friends all the time. I don’t think you can find a better fertility clinic anywhere in the U.S. I really believe they can help anyone achieve the dream of parenthood.