By Reproductive Science Center on August 6, 2013 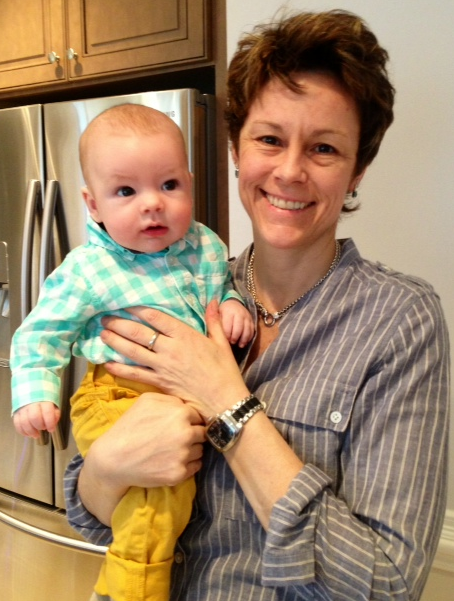 San Ramon, Calif. (Aug. 20, 2013) – Kelly Burke – a 45-year-old NASA research scientist – looks upon her babbling baby and ponders the unique reality that his biological siblings, created from the same embryo cycle and born to another family 2,500 miles away, will be of voting age at the time of his first birthday this November. This story could, possibly, only be conceived by a rocket scientist.

Kelly gave birth to Liam James using what her doctors believe to be the second oldest cryopreserved human embryo in history.

Having submitted herself to numerous fertility treatments and years of trying to become pregnant, the Virginia Beach mother says she had finally abandoned the idea of ever using her own eggs. Weighing her waning options, Kelly discovered a couple from Oregon looking to donate four embryos.

“Embryos are not easy to come by and the opportunity came unexpectedly. I was excited by the idea of carrying my child,” says Kelly.

Although embryo adoption is significant in itself, the embryos Kelly would adopt had an even more amazing story.

Nineteen years earlier, a woman donated her eggs at Reproductive Science Center of the Bay Area (RSC). In 1994, the couple from Oregon had been struggling with infertility and decided to use these donated eggs while going through in vitro fertilization (IVF). They transferred two embryos and froze the remaining embryos that had been created during the process. Happily, they delivered fraternal twins from that IVF cycle.

The embryos remained frozen until 2012 when the Oregon couple was put into contact with Kelly who went through a rigorous adoption process. “I think the couple knows more about me than some of my family,” Kelly joked.

Kelly adopted four embryos and flew to RSC for the implantation.

“We were all very excited about the procedure,” recalls Dr. Deborah Wachs, a reproductive endocrinologist at RSC – the fertility clinic recognized for the nation’s second successful birth from a frozen embryo in 1986.

“As was practiced in the early 90s, the embryos had been developed to the day-2 stage and then frozen,” says Dr. Wachs. “Currently, we commonly transfer and freeze embryos at the day-5 stage because it allows us to better select the embryos that are more likely to result in a pregnancy.

“In Kelly’s case, we decided to thaw all four day-2 embryos and culture them in our IVF lab to the day-5 blastocyst stage. We were successful in growing all four embryos to the day-5 stage. Kelly had two embryos transferred and was able to re-freeze the other two, giving her the option to have a second child later on if she so chooses.”

“It’s really amazing what we can now do with freezing embryos and eggs,” says Dr. Wachs. “For a number of social and health-related reasons, women can now successfully extend their fertility far beyond what was imaginable just a few years ago. And with matched success, we are now able to offer single embryo transfers and eliminate the concern of having multiple births.”

Back at home with her son, Kelly is thankful for the families and science that helped bring Liam James into the world. The embryo donors and Kelly agreed to have an open embryo adoption, which means her nine-month-old will one day have the chance to know his fraternal siblings who are now in their teens.

In 2010 the medical journal Fertility and Sterility reported, “19 years and 7 months […] represents the ‘oldest’ cryopreserved human embryos resulting in a live birth to date.”

Established in 1983, two years after the first successful birth through in vitro fertilization (IVF) in the U.S., Reproductive Science Center of the San Francisco Bay Area was responsible for the nation’s second successful birth of a baby from a frozen embryo. Today RSC is recognized for its pregnancy rates and work with egg donors and egg recipients from northern California, the U.S., Asia, India and from around the world. RSC is a trusted destination for patients pursuing medical tourism. For more information, please visit www.rscbayarea.com.