Campers Bivouacked on My Uterus Means I’m Pregnant With Twins

Excerpt from The Doctor and the Stork book 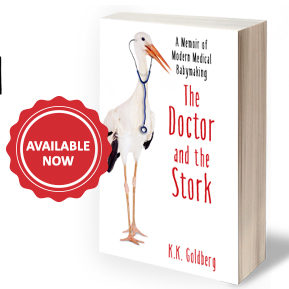 In the waiting room of the clinic, no one looked directly at anyone, the glances darted sidelong from behind old Esquires and Vogues. I, too, felt unable to resist peeking at the other women, and I pondered the infertility treatment uniform everyone had come to independently: loose tops, flip-flops, sweats. A stretchy waistband was easy on a bruised belly, and flip-flops came off fast. I looked down at my own exposed toes, painted pink. When you see your feet in stirrups almost daily, the dash of color can be cheering…

I walked stiffly, trying not to vibrate with our recent good news. I still identified with the other women there, still despised those who over the years had gloated at their random feats of reproductive luck. Besides, my excitement hummed with fear, a loud voice in the choir that couldn’t hold the happy tune. Now that I was “pregnant”— if I was indeed still “pregnant”– how did I know the baby would stick? It was a tiny camper bivouacked on the side of my uterus, perched precariously in the dark. Maybe its little tent had come unstaked. Maybe this was like the delusional pregnancies of the past three years, episodes of PMS spent trawling the Internet to study lists of “early symptoms” or squinting at one-lined pee sticks by a window.

At last, the nurse escorted us to a back room. “Undress from the waist down,” she said, the phrase they always used – a request but also a command, reminding you the next stage of waiting would involve being half-naked. “The doctor will be in soon…”

I left my body for the ultrasound wanding procedure, never used to the invasion of equipment, and focused on the black-and-white fuzzy screen. All three of us were transfixed—it could have been a landing on Mars.

Lines and dots appeared and I thought, Okay, it’s still there. I turned back to the ceiling and exhaled.

Dr. Marion and Ken were silent, the kind of silence that filled a room with noise, like static.

“Is that what I think it is?” Ken asked, with an optical physicist’s skill for reading grainy images.

“What?” I asked, trying to maintain my status as half in my body but following the screen.

“You have twins,” Dr. Marion said, in a neutral tone, with none of the excitement from the “you’re pregnant” call…

Dr. Marion studied my jeans. “You won’t be wearing those much longer.”

I knew it was true, but for once, I wasn’t worrying about my pants, riveted instead by the glossy photo in my hand, by the double outlet in black-and-white.

The ultrasound is by far my favorite part of the whole process. If it were not for the ultrasound, I might still be delivering babies rather than embryos. But in delivering the news of a good ultrasound to a patient, all of the excitement and joy of what new life can bring shines forth.

I know for patients it can be a very hard day. Sometimes the news is not good, actually heartbreaking. But the fact that the patient has gotten to this point in the fertility journey is an overall good prognostic sign. By being able to implant, sustain some hCG levels, and get to the point of looking on ultrasound to see if there is a heartbeat at six weeks, they’ve already achieved a milestone.

Even if the results are not good, as physicians, we still are on a new playing field. However, more often than not, the news IS good. And sometimes it can be shockingly good, as in the case with twins.

What we expect to see on that ultrasound depends on how far along in the pregnancy a patient is. Things can change dramatically in just a day. Most patients have the first pregnancy test two weeks after egg retrieval, or nine days after embryo transfer, and at that point they are considered four weeks pregnant.

Looking for the white dash – the fetus

More commonly, we may schedule the ultrasound closer to six weeks – two weeks after the pregnancy test. At six weeks we should see a gestational sac in the uterus, a small ring called the yolk sac, and a small little dash, often described as a piece of rice, which represents the fetus. Usually this is just a third of a centimeter. But we can see this because it is a white dash, surrounded by clear fluid that shows up as black on ultrasound.

Often times this little dash will have a flicker to it: the heartbeat. Because ultrasound picks up movement so well, we can see the heartbeat even when it is only millimeters in size. We almost always see the heartbeat at six weeks + three days gestational age. Therefore, if a patient is only six weeks + zero days pregnant, there may not be a heartbeat yet, and this can be normal.

The heartbeat starts slow but rapidly increases, so the heart rate that we measure depends on the gestational age. It is also at this time that we should be able to detect if there are identical or fraternal twins. While it could be missed, being so small at this time that we can’t see it, most of the time we can know for sure whether a patient will have one or two fetuses.

If we see a good heartbeat on a 6 1/2 week ultrasound, patients have a good prognosis. In most studies, this is greater than an 85 percent chance of a live birth. And that’s the best news a worried patient can hear.

It’s at six weeks of pregnancy that morning sickness symptoms also start, including nausea or food aversion. But not everybody has it. We will often have patients come back two weeks later to check the growth of the fetus and give instructions about medications and physical activity, usually allowing more sports and allowing a patient to be like a “normal pregnant patient.”

It’s a great day with smiles all around. And while there may still be worries for the future, today has been good.